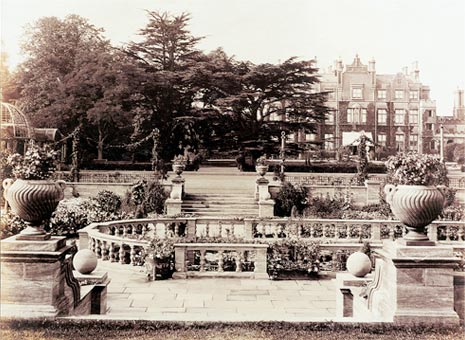 In 1902, the Gardens underwent their most radical change yet when the Countess commissioned Harold Peto to redesign them. The son of Sir Morton Peto, the engineer and railway magnate, he grew up at Somerleyton Hall on the Suffolk coast, surrounded by splendid gardens laid out by the eminent Victorian designer William Nesfield.

Harold Peto originally trained as an architect and, at one time, employed Edwin Lutyens and Herbert Baker as assistants in his business partnership with Ernest George. But it was as a designer that Harold Peto was to create some of the most notable Edwardian gardens in England. He brought to Easton Lodge a passion for Italianate and French design that he wove innovatively into the setting of the English countryside. He introduced strong architectural features including balustrades, stone columns, capitols and terraces. He created formal lawns, a yew walk, intricate wooden pergolas, a Japanese Garden, and a ‘pleached’ lime avenue with its own tree-house.

His designs at Easton Lodge are the only ones to be found in East Anglia and are considered one of the foremost examples of his work in the United Kingdom. Here, he was given the freest hand and an unlimited budget, and the Japanese Gardens (inspired by his visit to Japan in 1898) were the largest that he created.

Through Peto’s design, The Gardens of Easton Lodge became a series of skilfully-linked scenes, each with its own unique character, greatly feted and much photographed. They inspired many, including designers Beatrix Farrand and Percy Cane.

Most of Peto’s other designs are in the West Country although he also designed at Garinish Island, County Cork and in some privately owned villas on the French Riviera. His own garden, Iford Manor near Bradford-on-Avon, is privately owned but open to the public on a regular basis.