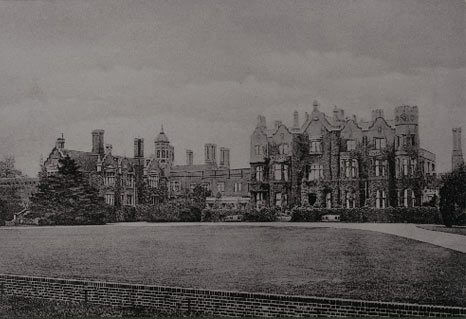 The Gardens, grounds and whole estate of Easton Lodge date back to Tudor times. It is believed that, in 1590, Elizabeth I granted the 10,000 acre Manor of Estaines to Henry Maynard as a reward for his duties as Private Secretary to the Lord Chancellor and Treasurer to the Queen. After demolishing a hunting lodge in the deer park, known as Easton Lodge, Maynard constructed an Elizabethan ‘H’ ground-plan mansion, similar to but smaller than Blickling Hall in Norfolk.

From the early 17th century onwards, the grounds and the house developed more or less with the fashion of the times and bore strong influences from the Continent. For example, the pastureland became a late example of a ‘patte d’oie’ design, where three tree-lined avenues radiate out from a central point, in the manner of a ‘goose-foot’. It was really only in the 19th century that further significant alterations were carried out.

In 1847, almost the whole of the Elizabethan part of the mansion was destroyed by fire. Although uninsured, the property was rebuilt in Victorian Gothic style at a cost of £12,000. This project was to be the last, before his death, of Thomas Hopper, architect of Wivenhoe Park in Essex.